Actor Ian Ziering on Sharknado: 'I never thought it would actually see the light of day' AP

"Sharknado" is going in for one last kill.

After five campy CGI spectacles stocked with squirm-inducing deaths, Syfy's unexpected social-media phenomenon is being put out to sea with "The Last Sharknado: It's About Time" (Sunday, 8 EDT/PDT). The latest cinematic cyclone follows shark-slaying hero Fin Shepard (Ian Ziering), who at the end of last year's "Sharknado 5: The Global Swarming," was seen wandering the Earth after it had been destroyed. Now, he must use time travel to stop the Sharknado that started it all and save his family. 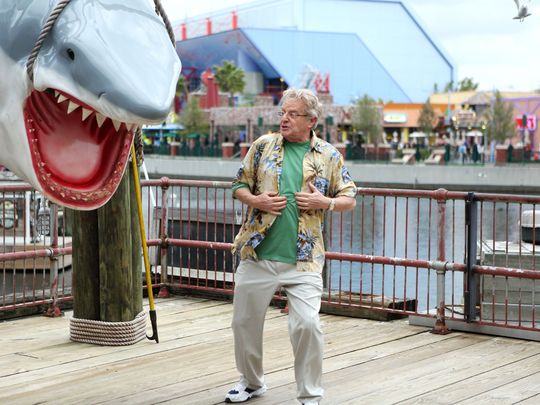 • Celebrity cameos: A school of guests from the B-list to the D-list have surfaced in the "Sharknado" series, among them: David Hasselhoff, Billy Ray Cyrus, Ann Coulter and Anthony Weiner. Ferrante's favorites include "Taxi" star Judd Hirsch playing – what else? – a cab driver, and "Airplane!" actor Robert Hays, both of whom appeared in "Sharknado 2." "I loved 'Airplane!,' and the fact that I got to direct Robert Hays playing an airplane pilot was just awesome," Ferrante says. "We had a lot of cameos in the second movie. It was the beginning of a lot of people (in the series) paying homage to something in their past." 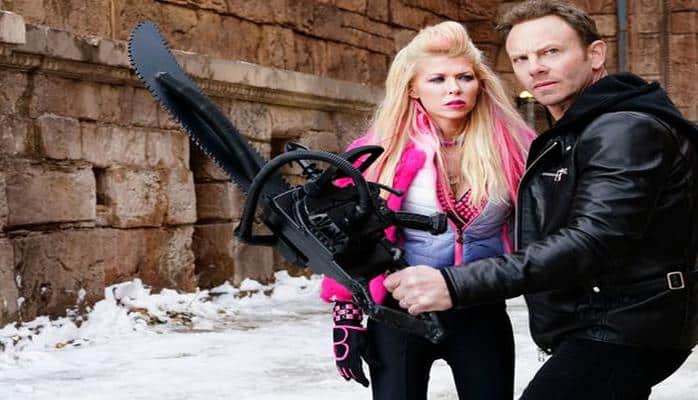 • Best weapon: Tasers, baseball bats, smashed wine bottles – if there's a way to defeat an airborne shark, Ferrante and the writers have thought of it. The films' most reliable weapons are chainsaws, which Fin wields to grisly effect. "The thing that defined us was in the first film, where we did this 'Crouching Tiger, Hidden Dragon' moment of Fin jumping in the air, getting swallowed and then chainsawing his way out," Ferrante says. "That sort of established us like, 'OK, they're going to go there.’ ”

• Most epic battle: No place is safe when great whites are in the forecast: Famous landmarks such as the Sphinx, White House and Statue of Liberty all succumbed to shark tornadoes. Ferrante especially had fun with "Global Swarming," which took Fin and April (Tara Reid) on a world tour through Tokyo, Rome and London. Waging war outside Buckingham Palace, "you have guards charging the sharks, and Fin has the Big Ben's (clock) hand," which he uses to "pole vault in to save the queen," Ferrante says. "It's stream-of-consciousness silliness." 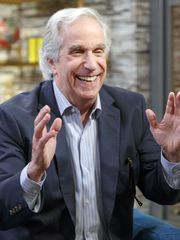 • Biggest regrets: "Sharknado 2" is Ferrante's favorite in the franchise (“It's like 'Evil Dead 2’ ”), although he hasn't yet decided which is the weakest. He doesn't regret anything he did in the series, but rather, what he didn't: "We never succeeded in doing any motorcycle gags, which we wrote into 2, 3, and 4" before they were cut, Ferrante says. "We were going to have Fin use the motorcycle to jump over a mountain that had broken apart." As for cameos, "Henry Winkler kept saying no. So Henry, when they do 'Sharknado: The New Beginnings,' we're coming for you."

• Jumping the shark: The "Sharknado" movies are nothing if not self-aware, chock full of cheesy pop-culture references ("It wouldn't be Texas without a chainsaw massacre") and shark puns ("You know what you did, don't you? You jumped the shark"). That line was Ferrante's attempt at making the movies critic-proof. "It's easy to write a whole review of 'Sharknado 2' like, 'Oh, the movie jumped the shark!’ ” he says. "We just got ahead of it and said, 'Once we make that joke, there's no way anybody can say that in a review, because we're already aware of what we're doing.’ ” (They still did.)

• Bad ads galore: Shoddy visual effects and green-screen backdrops are as much hallmarks of the "Sharknado" series as glaring product placement, such as a shark smashing into an Xfinity billboard and scientists using Google Glass to track 'nados. Although many fans rolled their eyes, Ferrante has no shame in plugging sponsors: "You look at 'E.T.' and realize how blatant the Reese's Pieces product placement is in that film," Ferrante says. "We ease into it like, 'It's in your face. Just shut up, it's part of the movie.' It's always fun trying to figure out how we're going to do it." 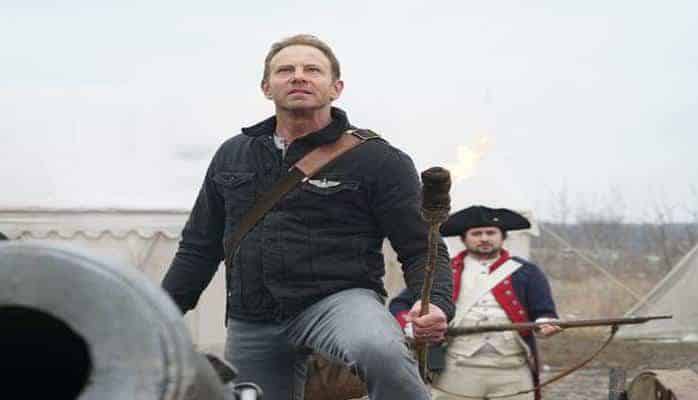 Fin (Ian Ziering) travels back to Colonial America in 'The Last Sharknado: It's About Time.' (Photo: Courtesy of Syfy)

• Turn back time: Sharknados aren't the only superstorms Fin and friends contend with. A nuclearnado, hailnado, firenado and cownado are just a few of the variations to blow through the first five movies, along with a new "timenado" in the sixth. "To be able to go to the Old West, the American Revolution and prehistoric times was just awesome," Ferrante says. "The last frontier would've been aliens, but time travel is where we kind of draw the line, which is a rare thing to say with a 'Sharknado' movie."